This One’s Important Too (Two)-NuWest Trail is Over

Your court case with NuWest/Leda is over. Want to tell us about it?

.
Sure, I’m glad to.  Dustin XXXXXX, a worker on our horse ranch, inherited the business, per the terms of David’s Trust.  Although David had wanted to change that, he died before the attorney could meet with us.  When that happened, I made good on my promise to David (Ed Lee) to step in as CFO.

While I held that position, Dustin did nothing except drain a lot of cash from the corporation. He had no experience, interest, or even the motivation to do what it takes to run a business. On top of that, he was never even into our scene, so you can imagine what an uphill battle I was fighting.  His exact words were “…I just want to get rich and live like the Kardashians!..” Ultimately, his greed got the better of him, and he foolishly decided to try to do it on his own. He was influenced by his wife Cristina, (someone whom David had gone out of his way to help gain U.S. citizenship) another former employee, Leland “Brock” XXXXX, and the former Leda model, Venita XXXXX, aka Vanna. David had gotten rid of Brock at least a decade earlier, and he’d also permanently banished “Vanna” for her continued use of methamphetamines. These collective mental midgets put their pointy little heads together and with the help of attorneys Amy & Kevin Nett, Dustin launched a poorly researched lawsuit against me. I was literally blindsided, and believe me, that rarely happens. The accusations were so outrageous, it would have been laughable, if not so infuriating. This all began at the end of 2013, and by October 2014, Dustin had parted ways with his lawyers, likely due to unpaid legal bills. With and without his attorneys, Dustin did everything possible to keep dragging it on but finally just last month (Feb 9) after countless delays and irrefutable evidence which proved Dustin not only wrong, but a liar, it all came to an end. His case was dismissed with prejudice, which means he can never file another suit like this against me.  I was listed as the prevailing party in all actions, and I’m able to sue him if I wish to. David would want me to go after him for all he’s worth, but to tell you the truth, I just never want to see his face again.  Besides, he’s got little if anything left of any value. The court imposed monetary sanctions against him, and he was ordered to return personal property which he stole from our home. Here’s the kicker:  Dustin actually asked if I’d come back to run the company for him!  Not once, but three times.  Yeah… like that’d ever happen!  Guess he finally figured out what a huge mistake he’d made, but after what he did to David’s legacy, the only thing I want to do with him is to string him up and flay the skin off his back!

What does this mean going forward? Is NuWest done?
.
The truth of the matter is that NWL is virtually worthless now. Dustin accused me of somehow finding and destroying decades’ worth of model releases, all while I was caring for David 24/7.  Ridiculous, especially because I knew I never signed releases, and found out that some of the other longtime LEDA Ladies rarely did, either. Jodi, Karen, and Jacque were just a few. However, the releases are required under Federal pornography laws, so by his own actions, Dustin has now put himself on the hot seat. Sadly, one customer already encountered serious legal problems when entering the UK with one of our videos on his laptop, and when the required releases could not be produced, he was actually held in custody pending trial. His situation didn’t end well, and theoretically this could happen to anyone in possession of NWL videos, because of the rightfully stringent laws against child pornography. While David never used underage models, you must be able to prove it. Dustin’s website claims he has the required releases, but that’s completely false.  I do know that he’s shot four new releases with that washed up old has-been, “Vanna,” and I assume he was smart enough to comply with the law for his new “creative endeavors.” But anything before that… could cost him big time.  Additionally, as we’ve all seen here on your blog, one customer after another reports problems such as paying but not getting their downloads or receiving blank DVD’s. To add insult to injury, people haven’t even been able to get a response from the company.  He’s scrambling now, trying to reinvent himself and magically become what he needs to be, but he doesn’t know or care enough.  He just wants money.  So, yes… I think Nu-West/LEDA is done. At the very least, the NWL that David created, is now a thing of the past.  It’s a free country, but with so many legitimate and REAL spanking companies, why would anyone want to do business with a fake one?

.
I’m sure you’ve had time to reflect on the company, on David, and what you two built together. How tough has that been?
.
It’s been really difficult to watch David’s legacy be tarnished if not destroyed, especially for no reason other than the greed of one ungrateful and undeserving individual. I really can’t put into words how saddened I am that I was unable to prevent this. Even though I tried, I feel as though I let David down.

You didn’t. You fought. We know you loved him and cherished his legacy. Did you get enough time to grieve before being slapped with the lawsuit?

Although this is an intensely private matter, it deserves to be answered. No, not at all. Within 24 hours of David’s death, I had to immediately focus on the business.  I gave it 110% and then, all of a sudden, I was being sued. I never had the luxury of truly coping with my own personal loss. I still haven’t, but I’ll get there. There were so many things that we kept private, just between the two of us, the things that make up a marriage and a relationship. We could be fire and ice together sometimes, but  the love we shared was indestructible. I want to dwell on those happy memories, reflect on all the years we shared. Kind of funny that David was an avowed atheist, yet I like to think that he’s up there…out there.  I “talk” to him almost every day.

Your victory, though costly, is sweet. You had a lot of vocal and non vocal supporters all through the spanking community. Did that help?
.
Absolutely, without a doubt.  It’s really been a primary source of strength for me.  Far too many names to list here, but you all know who you are. Without the outpouring of love and support, I’m not sure I’d have made it through this nightmare.  I can never thank everyone enough, and that includes you, Andy. By reaching out to me and allowing your blog to be a sort of clearing house for readers’ comments, you gave me a valuable gift. I owe such a debt of gratitude to so many wonderful supporters. I only hope that you all know how much appreciative I am.

Hopefully they will show you more love after this post. What will you do now?

.
That’s a great question. For at least the next several months, I’ll be busy trying to deal with all the other areas of the Trust that had to be put on the back burner because of the litigation. This is challenging, largely due to many mysteriously missing documents, files, etc. and also because it cost a great deal of money to fight Dustin’s lawsuit. It’s all going to take time and money, but I’ll figure it out and eventually… get back to having a real life again.

You wouldn’t retire your hairbrush would you? 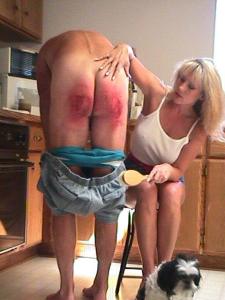 .
Is that a challenge, young man?  <wicked grin> No…that’s highly unlikely. Going through all of this hasn’t weakened me, it’s actually strengthened me. I do want to have more time with the horses, but they’re all reasonably well-behaved. The way I see it, there is never a lack of naughty boys (and girls) who deserve a trip across my lap, so… I’ll be back.  🙂

This entry was posted in interview, PSA public spanking announcement. Bookmark the permalink.